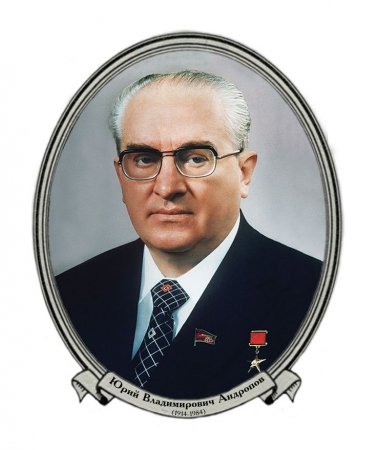 Yuri Vladimirovich Andropov served as the fourth General Secretary of the Central Committee of the CPSU (Central Committee of the Communist Party of the Soviet Union). He has been in this position for the entire 15 six months later, he died of kidney failure at the age of sixty-nine. Before becoming General Secretary, Andropov worked for a long time in various communist organizations and in government positions, in particular:, 15 years in the KGB, gradually rising in the state hierarchy. Andropov, in fact, was the interim head. He lacked the energy and vision to implement the reforms he considered necessary for the survival of the Soviet Union. The pointless war in Afghanistan continued to drain the economy. The Cold War, although Andropov did not know it, was lost, and the USSR had to devote less money and energy to military matters, and more to achieving a decent standard of living for its people. Some believe that Andropov's ideas have borne fruit in politics, which eventually led to the reform of the Soviet Union under Mikhail Gorbachev. Nevertheless, Andropov was more interested in preserving the existing system than in reforms.

Yuri Vladimirovich Andropov was born 15 June's 1914 g. at Nagutskaya station, Stavropol province, Russian Empire.
His father, a railway employee, Vladimir Konstantinovich Andropov, belonged to a noble family of Don Cossacks. Yuri's mother, the daughter of the owner of a Moscow jewelry store, Yevgenia Karlovna Fleckenstein, was of Finno-German descent.
Yuri Andropov was the only child of his parents. The boy's father fell ill with typhus and died when Yuri was still very young. After that, his mother moved with him to the city of Mozdok, where she remarried. However, some other sources claim that Yuri Andropov's parents are divorced.

Yuri's mother died in 1927 a year when he was only thirteen years old. After that, he was raised by his stepfather Viktor Aleksandrovich Fedorov, who sent the boy to work at the age of fourteen. At the same time, Yuri Andropov continued to receive an education.

Andropov spent his teenage years working as a longshoreman, telegraph operator, projectionist, and sailor on a Volga steamship. In 1930 In 1970, while still in Mozdok, he became a member of the Komsomol (All-Union Leninist Communist Youth Union, Komsomol).
In 1932 year Andropov began to study at the Rybinsk River Technical School, graduating in 1936 year. After that, he became a komsomol organizer at the Volodarsky shipyard in Rybinsk, receiving a job that he was supposed to perform with maximum efficiency.

Andropov worked at the shipyard for a short time, but long enough for his effectiveness to be noticed by his superiors. 1938 G. he became the first secretary in the Yaroslavl regional Committee of the Komsomol. The following year, Andropov joined the Communist Party.

In 1940 G. he became the first secretary in the Central Committee of the LKSM (Lenin's Communist Youth Union) The Karelian-Finnish SSR, created as a result of the Soviet-Finnish War. Andropov held this position until 1944 G. During this period, he also led a group of partisans in areas controlled by the Finnish Army.

Work in the Communist Party

In 1944 G. Andropov began to show more activity in the Communist Party, and he was assigned to organize youth in the territory of the Karelo-Finnish SSR.

In 1946 G. Andropov started his studies at Petrozavodsk State University, where he studied philology until 1951 G., while continuing to join the Communist Party. Meanwhile, in 1947 G. he became the second secretary in the Central Committee of the Communist Party of the Karelo-Finnish SSR.

The turning point of his life occurred when, in 1951 In 1970, Andropov was transferred to Moscow, where he was appointed to the Central Committee of the CPSU, which was considered a testing ground for promising young civil servants. Here he was appointed inspector.

Yuri Andropov stayed in Moscow until 1953 years. Most of his superiors were staunch Stalinists, and although Andropov served them very loyally, he was never implicated in the terror spread by the secret services during this period.

Some time after Stalin's death 5 martha 1953 G. Andropov was introduced to the Ministry of Foreign Affairs of the USSR. In the same year, after a short training period in Moscow, he was sent to Hungary.

In July 1954 years later, Andropov received the post of Ambassador Extraordinary and Plenipotentiary of the USSR to Hungary. Over the next two years, he closely followed the events that led to the anti-communist Hungarian uprising in October 1956 During the previous year, he regularly sent reports to Moscow and played an important role in suppressing the uprising.

Initially, Nikita Khrushchev, then First Secretary of the Central Committee of the CPSU (a position created by Khrushchev after Stalin's death and renamed back to "General Secretary" under Brezhnev), did not want to invade Hungary. Andropov managed to convince him of the need for a military invasion, also sending a request for Soviet military assistance from Erne Gere, who was the First Secretary in the Central Committee of the Hungarian Workers ' Party.

Andropov also managed to convince Hungarian Prime Minister Imre Nagy that he was safe, confusing him about Soviet intentions. The USSR eventually invaded Hungary in November 1956 years, violently crushing the uprising. Nagy was eventually arrested and executed in 1958 year.

Head of the KGB

In 1967 G. Andropov was elected as a candidate member of the Politburo. In the same year, Mikhail Suslov, second secretary in the Central Committee of the CPSU, recommended that Andropov be appointed chairman of the USSR State Security Committee (KGB).

When Andropov took over as head of the KGB, he faced two main challenges. First, he had to restore the prestige of the KGB, which had suffered greatly under Stalin and his supporters. Second, he needed to silence dissidents who demanded further de-Stalinization and publicly protested against violations of human rights and freedoms.

Andropov served as chairman of the KGB for a long time, making it one of the most effective secret services in the world. In order to restore prestige among his compatriots, he organized agitation campaigns, while at the same time taking care not to allow officials to abuse power for personal gain.

Along with restoring the prestige of the KGB, Andropov also began working to eliminate dissent. In July 1967 He created the Fifth Directorate of the KGB of the USSR to eliminate all forms of dissent. Andropov believed that the struggle for human rights was an imperialist plot to destroy Soviet ideology.

In 1968 Last year, he called for the elimination of dissidents, arresting and sentencing them to years of hard labor for anti-Soviet propaganda. Some were sent to psychiatric hospitals, where they were given mind-altering drugs. Still others were sent to the permalink.

When in January 1968 When the movement for liberalization began in Czechoslovakia, Andropov proposed an extreme measure. He initiated false propaganda, accusing NATO of trying to destabilize the country.

His achievements were quickly recognized, and in 1973 G. Andropov was able to become a full member of the Politburo. Continuing to lead the KGB, he established himself as an effective and honest statesman. By the end of the decade, Andropov had made sure that all groups advocating for human rights and individual freedom were suppressed.

From the middle 1970-As General Secretary Leonid Brezhnev's health began to decline in the 1990s, Andropov began to position himself as his successor. When in 1979 When the USSR decided to invade Afghanistan, Andropov was one of the initiators of this decision, while fearing that the international community would blame the USSR for his person. Later, he was right.

In 1981 In the year when the Solidarity movement started in Poland, he successfully persuaded General Secretary Leonid Brezhnev not to send troops or invade Poland. During this period, he also took care of promoting reformist leaders, one of whom was Mikhail Gorbachev.

Head of the Soviet Union

In may 1982 G. Andropov resigned from the KGB and became a member of the Secretariat. 12 November's 1982 G., two days after the death of Leonid Brezhnev, he was elected General Secretary of the CPSU Central Committee.

Andropov's appointment was not at all welcomed by the Western world. In many newspapers in the West, there were numerous articles about him, most of which portrayed Andropov negatively. It was perceived as a new threat to global stability, especially for Western Europe and the United States.

Shortly after his election, Andropov launched a campaign against corruption. As head of the KGB, he accumulated enough material to prove widespread corruption within the bureaucratic system. Now Andropov used the secret service to track down criminals, firing eighteen ministers and thirty-seven first secretaries of the CPSU regional committees, launching criminal cases against many.

He also tried to rejuvenate the economy by increasing efficiency without compromising socialist values. To improve industrial production, Andropov created a system of performance rewards and penalties for absenteeism. He also appointed young officials to the Politburo.

In international relations, Andropov began to look for ways and means of leaving Afghanistan, but it was not possible to reach a compromise. He also began to seek peace in Europe, starting Soviet-American negotiations on nuclear weapons control on its territory. Andropov intended to stop the United States from deploying Pershing missiles in Western Europe.

In August 1983 A year later, Andropov announced that the Soviet Union would stop all work on space-based missiles. But in September, when his forces shot down a Korean airliner that mistakenly entered Soviet airspace, Andropov defended his border forces, straining his country's relations with the West.

In November 1983 G. negotiations on the control of intermediate-range nuclear weapons in Europe were suspended, and very soon the Soviet Union completely withdrew from the negotiations. By that time, Andropov's health had significantly deteriorated.

In February 1983 G. Andropov faced kidney failure. In August, he was transferred to the Central Clinical Hospital in the west of Moscow. Yuri Vladimirovich Andropov passed away 9 February 1984 G. At that time, he was sixty-nine years old.

Yuri Vladimirovich Andropov married for the first time Nina Ivanovna Engalycheva, whom he probably knew from an early age. The couple had two children: a daughter, Yevgenia Yuryevna Andropova, 1936 year of birth, and son Andropov Vladimir Yuryevich, 1940 year of birth. Vladimir died in 1975 a year under mysterious circumstances. The couple divorced somewhere in 1940 year.

Andropov married his second wife, Tatyana Filipovna Lebedeva, somewhere in Moscow. 1940-in the 1990s. They met during World War II on the Karelian Front, where she was secretary of the Komsomol. They had two children: a son, Igor Yuryevich Andropov, 1941 year of birth and daughter Irina, 1946 year of birth.

Because of his mother's maiden name, it was rumored that Yuri Andropov was of Jewish descent. But this turned out to be incorrect. Since then, it has been proven that many German Christians also had the surname Fleckenstein.