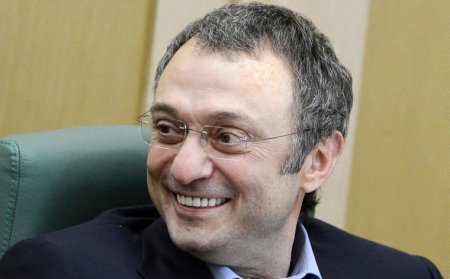 At the moment To Suleiman 55 years old, he was born 12 March. Place of birth West coast of the Caspian sea. He was born into an ordinary family. His father was involved in criminal investigation, and his mother worked as an accountant in one of the world's largest banks - Sberbank.
He was raised in a family with three children. His sister later chose the profession of a Russian teacher a doctor's brother.

Despite this, Suleiman was able to achieve 225 places in the world and 26 place by country in relation to welfare. He is the owner of one of the major oil companies, as well as a company that is engaged in gold mining.

He tries to actively help young people find their own way . Opening the Golden youth front.

Kerimov excelled at school, was drawn to knowledge. Most of all , he loved mathematics. He graduated from high school with a gold medal. He is the pride of his family. In his youth , he entered the civil engineering University, was able to study for only one year and joined the army. After returning, I decided to quit the faculty of civil engineering, as I lost all interest. But I continued my studies in Economics.

After training, I did not want to be idle for a long time and decided to get a job in an economic factory. I worked there for five years and was able to raise it to the General Director of Finance.

Five years later, the plant's management decided to transfer Suleiman's in PetroBank. This Bank was created to improve cooperation with regular customers who had financial problems.

During his time at the Bank, he was able to lend to quite a large number of businessmen, helped in special cases and as a result acquired strong and reliable connections.

Got into Vladimir's confidence Zhirinovsky Zhirinovsky and entered into his the liberal democratic party. He was his right -hand man.

But at the same time everything has changed, Suleiman abruptly left the party and joined the United Russia. He did not give any explanations to either reporters or Zhirinovsky, which spoiled relations with him. At the top of the party He was able to work in Russia for only two years. Meanwhile , he made two weekend deals with Russian businessmen, which later raised his rating and brought quite a lot of profit.

He began to buy up land for the construction of luxury housing, but soon quickly abandoned the project and resold it so profitably.
The businessman has the acumen, intelligence and it is given to him by nature, to calculate every step for profit. Thanks to this , he saved up shares for quite a long time and was able to acquire a stake in the largest company Gazprom, sugar factories, and part of the shares from Sberbank.

But even the most successful ones make mistakes. Kerimov actively bought up shares of foreign companies and was able to lose 20 billions of dollars per year. It was on the verge of bankruptcy.

But he could not put up with poverty and began to actively create new projects, in which he put his whole soul. The result did not take long to wait, he was able to bring the richest businessmen back into operation in a short time .

He decided to buy up 37% of the business at the largest gold miner countries and was able to get back on his feet.

Then he introduced his children into his business and now has 95% passive income from each transaction.

In 2009 this year , he again decides to invest his money in the amount of 200 billions of dollars in shares of foreign companies, but this did not bring him any profit, as the company quickly went bankrupt.
At the moment Kerimov does not interfere in the business of his children and has his share, which brings him billions.

Personal life of a businessman.

Suleiman Kerimov married for convenience. His wife is Feruza, the daughter of an official. In the marriage, she gave birth to three children. In society , the businessman never appeared with his wife. Rumor has it that he is shy about appearing with her in a public place.
More than once he was caught in the company of socialites. He is credited with romances with various successful ladies, one of them is Anastasia Volochkova street.

Suleiman is passionate about sports. He was able to create a national team, which became promoted due to the large investments of its owner. For a long time, the national team brought him a huge profit, at the expense of which the mosque of the Moscow national team was built.
In 2006 last year , a businessman was involved in a serious accident. Most of the body was covered in burns. This The accident caused a huge resonance, as the oligarch could not cope with the control of the car, the Ferrari brand and the public let in the rumor that passenger was the Russian the media personality Kandelaki. But she Kandelaki this information denies to this day. After a heavy rehabilitation, Kerimov made a decision to do charity work and listed 1 a million dollars to save the children's Fund.

Problems with the authorities.

In 2017 last year , he was arrested by the French authorities for tax evasion in connection with the purchase Ostrava on the Cote d'azur. During the investigation it was found out that the alligarch was able to withdraw from Russia in France more than 500 billions of dollars, and this act was illegal.

On this fact court cases were opened three times and the final decision was to pay the following amounts: 40 billions of euros, as well as house arrest.

During this very period, previously strengthened ties were revealed. The press called from the Kremlin to France - Secretary Peskov, in order to help the Russian official, openly stated that his Senator was in trouble abroad Russia won't quit.

At the moment Suleiman lives in France, as the house arrest will last until the entire amount of the debt is paid. Only occasionally does he travel to Russia on family business.

On the moment alligarh has about 6 billions of dollars.

Suleiman was always an amorous man, and women were always swarming around him . But with his wife He wasn't going to divorce Firuza , and he wouldn't. He officially announced to the press, that the only and most important lady in his life is his legitimate wife. He also taught her how to run a business and she runs several companies.

It is worth mentioning that he was able to create his dizzying career not only thanks to his intelligence and work, but also his wife's father helped him in everything . Since at the time when Kerimov was just beginning his path to wealth, his father-in-law held high positions, had a huge fortune and many connections. He contributed in every possible way both with words, advice, and money to his only son-in-law.
But even that didn't stop him Suleiman, he was often seen on the side.

One of his brightest mistresses was Vetlitskaya street. They met at a time when the singer's career was on the wane. Fans of the singer began to forget their idol. But the appearance of After Suleiman's death, everything changed. He invested a huge fortune to regain popularity Natalia. Their relationship continued 4 years. From this novel , Vetlitskaya had a daughter. Kerimov was very jealous of the singer, gave her luxury gifts, houses, a private plane and a house in Paris.

Through 4 two years later, they broke up because the businessman was attracted to another woman.

His next lover was Volochkova. Suleiman got her a job at the Bolshoi theater, was very jealous, controlled her. Their romance was dizzying and short-lived. Anastasia tried to take him away from the family, but the man did not want it and the result-they parted enemies. The businessman made it so that Volochkova was kicked out of the big stage and was harassed for a long time.

Comments
Concepts of good and evil in the history of civilization
Astrology - history of science
Poland - briefly the whole story
Instructive stories for children
Dwellings of the peoples of the world
Add comment
WWW.ISTMIRA.COM